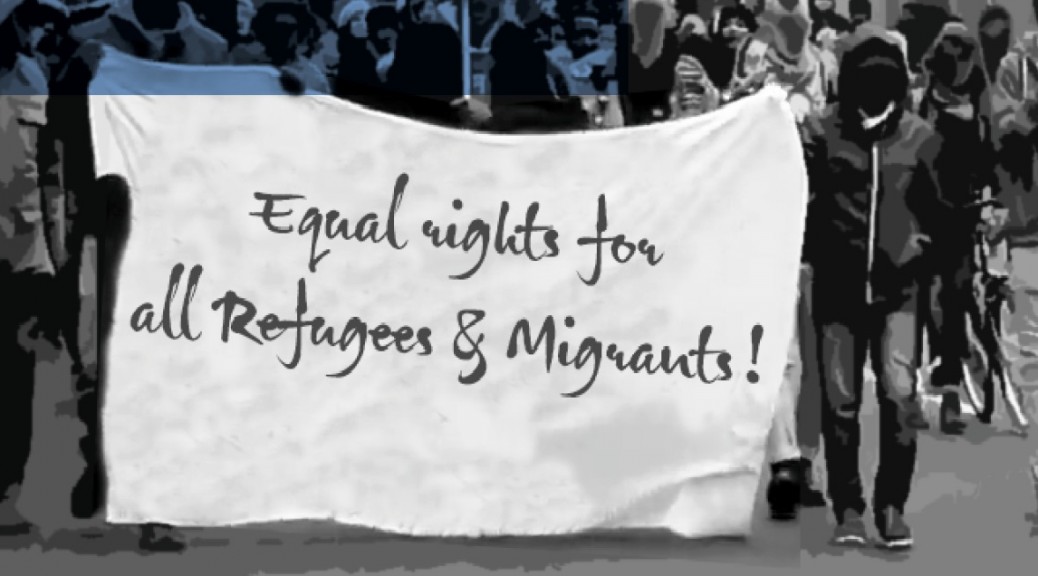 Why are the Somalis excluded from the German courses?

In the last three years, the discrimination of Somalian refugees in Germany increased. 85% of the Somalis who came to Germany in 2013 have not had any interview with the immigration office yet, they just eat and sleep like animals. A part of them also was deported to Italy, Malta and other countries at the outside borders of Europe. A lot of people from other communities like Eritrea who came in 2013, have already got documents, permissions for German courses and have had their interviews. We are very happy that our brothers and sisters from Eritrea, Syria, Iraq, etc got help, but the question is: Why are you discriminating the Somalis?!

The last two months, the schools (the integration courses) have denied the Somalis access. We tried to contact the immigration office and sent so many emails but we did not receive an answer. We are here today to get answers to our questions. Somalia is not a safe country of origin and you know that! We remind you of the situation in Somalia, the actions of Al-Shabaab are the reason why people flee. The government commits targeted killings, beheadings and executions. Al-Shabaab continues to forcibly recruit adults and children, this administration of „justice“ is arbitrary and restricts basic rights.
Al-Shabaab claimed responsibility for a major attack on the Westgate shopping mall, an upscale shopping center in Nairobi, Kenya, on September 21 that killed 67 people, which was the most highprofile attack outside of Somalia. There were several other attacks: for instance in February 2015, Alshabaab killed 150 people in Kenya’s Garisa University and there was an attack on Aljaziira hotel when Obama was in Kenya.
For journalists, Somalia remains one of the most dangerous countries
in the world. Five journalists and media workers were killed in 2015, four of them in Mogadishu. Women and girls face alarming levels of sexual violence throughout the country. Internally displaced women and girls are particularly vulnerable to be raped by armed men including government soldiers and members of the military.
Many of the Somalian refugees who live in Hessen at the moment are illiterate because since 1991, when Somalia was smashed, there has been no education system in Somalia at all. The illiteracy rate in Somalia is as high as 98% for women and 70% for men. Up to now, there is no functioning government.

When the Somalian refugees reach Hessen, they hope that they learn at least how to read and write but unfortunately this government is treating us so cruelly and shut all the schools for us. Today we need an answer. Why are you treating us like that? We are human beings like you, we need what you need and we need the integration course in order to adapt to the society.

When we had to face the problem of deportation due to the
Dublin-regulation, we established a political organization called
Refugees4Change (Re4ch). Re4ch is a group of asylum seekers in and around Frankfurt being politically supported by noborder frankfurt. Re4ch staged demonstrations against Dublin II and III in Frankfurt, Gießen, Darmstadt and other places. Due to solidarity support we were able to prevent a number of deportations of our friends. It’s our aim to fight and to end the fear and insecurity of being a refugee in Germany. Our aim has been to fight discrimination and inhuman conditions that the refugees are subjected to inside Germany. The reasons why people are forced to flee are diverse: Persecution, torture, war, danger of death-penalty and destruction of means of existence, etc. We demand protection and a solidary welcome instead of detention and isolation. Every human being has to have the right to decide freely where he or she wants to live. We demand the right to stay and the right to learn in schools.

Information for people who are threatened by deportation [click here]